Routing rules are used to tell the PBX how to handle calls (incoming and outgoing) based on different selection criteria. The routing takes care of selecting the gateway on which to forward outgoing calls, sorting incoming calls to the said switchboard entities. A routing rule is essentially composed of a criterion that allows to associate numbers to one and only one entity and then decide the route for the destination of a call.
NOTE : this section of the PBX should normally only be used for special advanced settings (see below), since the main routes for outgoing and incoming calls are made through the LCR module and theWizard of business numbers .

serve respectively to eliminate, consult and modify the configurations.

To create a new routing rule click on the icon

. The parameters available are the following:

SELECTION CRITERIA OF THE RULES

The call routing rules for a particular number (N) are chosen by the system based on comparison criteria: each comparison provides a score . The scores obtained by the different comparisons are added together and the results obtained are used as priority values: the rule that obtains the highest score will be chosen. Within a company the criteria used for choosing a rule are the following:

In order for checks to be carried out on entire categories of numbers (eg national, district, international, mobile, etc.) it is possible to define ranges of numbers and strings in a powerful and flexible way thanks to the introduction of regular expressions . A regular expression is a sequence of symbols (hence a string) which in turn identifies a set of strings. Thanks to a particular symbology and a simple syntax it will be possible to build rules to identify sets of numbers.

VOIspeed 6 uses a subset of the regular expressions commonly known in computer science: to be precise, 2 symbols are used to identify the beginning and end of the strings and a Jolly symbol to identify any string.

Note : the routing rules compare the criterion entered by the administrator with the numbers always starting from the first character , therefore you will notice how the system always automatically inserts the symbol of beginning string (^) even if omitted by the administrator. This also implies that when you insert the end-of-string symbol ($), in fact you are defining a complete number (which assumes an exact comparison 1: 1).

Here are some other examples:

If more criteria are successful in comparison with a number, the criterion containing the greatest number of digits will be chosen (ie the one that offers the longest match). For example, with the number 02123 456789 , between the two criteria ^ 02123 and ^ 02, the first would “win”.

Mapping rules apply a “transformation” from one number to another. The mapping is used for the management of the pass-through selection and the creation of short numbers to call real numbers (for example, the business phones of one’s colleagues). 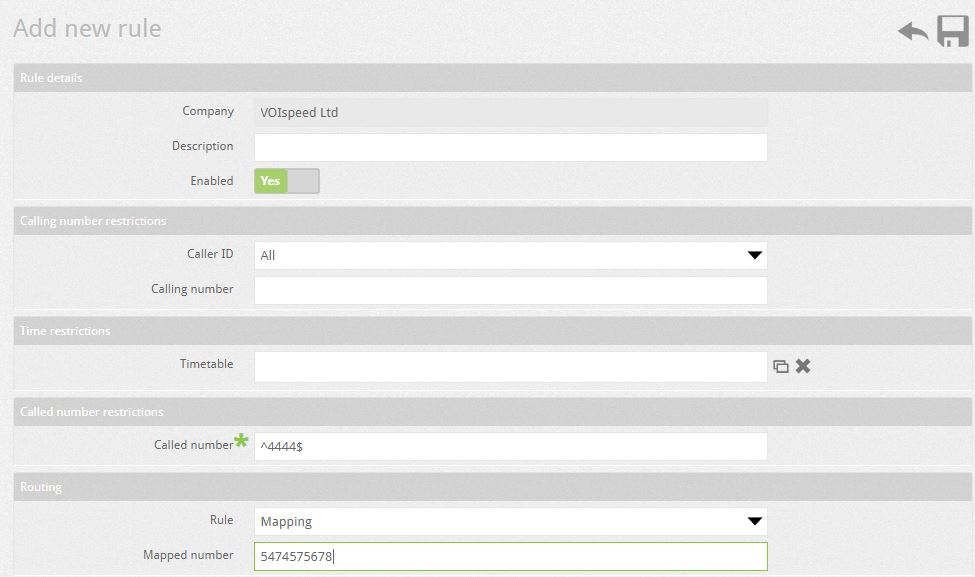 Warning: do not use codes that coincide with the switchboard extensions or with emergency numbers (112, 113, 118, etc.)

Becoming a VOIspeed partner is an opportunity to grow your business and add value to your customers. Discover our partnership programme.

Looking for a phone system?

Would you like to have more information about our telephone services? One of our consultants will contact you to discuss your requirements.

Strictly Necessary Cookie should be enabled at all times so that we can save your preferences for cookie settings.

If you disable this cookie, we will not be able to save your preferences. This means that every time you visit this website you will need to enable or disable cookies again.